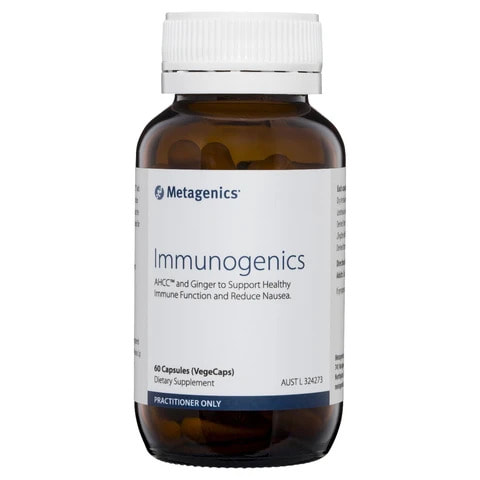 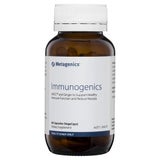 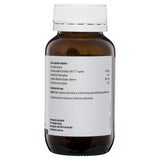 Immunogenics supports patients with an impaired immune response, assisting with immune system surveillance and modulation. Research into AHCC™ reveals positive effects on both innate and adaptive immunity. Specifically, AHCC™ has been shown to enhance natural killer (NK) cell activity, cytokine production, whilst promoting macrophage activity and increasing the number and activity of dendritic cells. Furthermore, research also indicates benefits for the adaptive immune response pertaining to both B and T cell lymphocytes. AHCC™ is well tolerated, making it suitable as an adjunct for immunosuppressed patients during and in between treatments to reduce possible side effects.

Ginger assists with nausea, vomiting, gut barrier function, and also exerts anti-ulcer, anti-inflammatory and immunomodulatory effects. Supporting gastrointestinal health is paramount to optimal functioning of the immune system. Ginger provides a protective action on the intestinal mucosa and has been shown to ameliorate intestinal damage by reducing neutrophil infiltration and the pro-inflammatory response, while reducing oxidant stress and lipid peroxidation. Ginger compounds are also able to elicit an anti-inflammatory effect via inhibition of key inflammatory response mediators, such as Nuclear factor kappa B (NFkB), Cyclooxygenase (COX) enzymes, and 5-Lipoxygenase (5-Lox). Furthermore, Ginger is able to support a healthy appetite thereby supporting energy production and reduce fatigue.

Having been studied in hundreds of clinical trials, AHCC™ is used in more than 600 international hospitals and institutions for an array of medical conditions. Immunogenics has been formulated to match the amount of AHCC™ used in human clinical trials. AHCC™ itself is a mixture of amino acids, lipids, and minerals extracted from a culture of Shiitake mushroom (Lentinula edodes), with polysaccharides being an active component. AHCC™ research in human populations has also shown improved immune parameters in immunocompromised people. AHCC™ has demonstrable safety and a history of being well tolerated since it’s launched in 1989, with hundreds of thousands of users reporting no serious side effects.